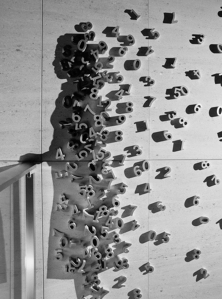 “Life itself is but the shadow of death, and souls departed but the shadows of the living,” noted Thomas Browne, 16th Century writer, physician, and philosopher. Since the dawn of time, the shadows of people, objects, things, nature, have intrigued, inspired, and evolved into various symbolic meanings for humankind.

The shadow is a source of inspiration in the popular culture of Western society. Countless artists and writers have incorporated the symbol of the shadow into their work. For example, Poet W. H Auden writes, “Every man carries with him through life a mirror, as unique and impossible to get rid of as his shadow.” Confessional poet Sylvia Plath wrote, “I thought the most beautiful thing in the world must be shadow.” Contemporary Japanese artist Kumi Yamashita, whose artwork has been exhibited around the world and who is winner of many awards, incorporates the shadow into her sculptures, such as the public art work displayed on a wall in an office building called “City View.” It is the shadow of a woman gazing at the endless stream of strangers passing.

The shadow inspired radio dramas, pulp novels, comic books, television series, a video game, and a movie. In the 1930s, it was morphed into a superhero called “The Shadow,” who had psychic powers and played the role of a crime-fighting vigilante. Beginning in 1930, the superhero was also made into a radio show called Detective Story Hour. The radio show began with the introduction “Who knows what evil lurks in the hearts of men?” In 1994, the film, “The Shadow,” starring Alex Baldwin, was released into theatres. The same year, Ocean Software sold the superhero video game called The Shadow. It was available to anyone who owned Super Nintendo.

In photography, the shadow often transforms the ordinary into something extraordinary, such as a feeling of mystery. Or it can infuse drama into banal setting, making it into art. Shadows often compel me to stop and pay attention, for a few moments, aim my lens, press the shutter, capture a memory. Many portrait photographers use a single light source to create portraits with shadows by placing a single light source at the side of the sitter, which illuminates only half of the face. Portrait photographer Irving Penn infused the shadow and light into many of his dramatic black and white photographs of celebrities and public figures, such as Al Pacino, Jean Cocteau, John F Kennedy, Louise Bourgeois.
In various religions, the shadow has symbolic meaning. Buddha said, “We are shaped by our thoughts; we become what we think. When the mind is pure, joy follows like a shadow that never leaves.”In Christianity, the shadow is symbolic of man’s seven deadly sins. It is also referred to in the 23rd Psalm of the bible as the shadow of death: “Even though I walk through the valley of the shadow of death, I will fear no evil, for you (God) are with me; your rod and your staff, they comfort me.”
The shadow is popular in mythology. According to Jewish folklore, Lilith was the first wife of Adam, who God created, was banished from the Garden of Eden for refusing to obey Adam’s wishes. After being cast away, Adam took his second wife, Eve, and Lilith became a demon who stalked and murdered newborn infants at night.

In astrology, the shadow is incorporated into Black Moon Lilith. The dark moon refers to the moon’s farthest point of orbit around the earth, while the shadow is referred to as Lilith, a mythical Goddess representing the dark side. She appears in everyone’s Horoscope and tells us that we are capable of revenge or evil deeds.

Psychologist Carl Jung believed we all have a shadow, dark side, alter ego, hidden from view. Jung surmised that the shadow is an archetype, part of the collective unconsciousness, existing within every human being. He writes: When it [shadow] appears as an archetype…it is quite within the possibility for a man to recognize the relative evil of his nature, but it is a rare and shattering experience for him to gaze into the face of absolute evil. The shadow is our alter ego representing bad habits, undesirable behaviour, unattractive emotions, such as anger, prejudicial attitudes, unsavory impulses, immoral thoughts–anything that reduces our reputation in the eyes of another. Jung writes, “One does not become enlightened by imagining figures of light, but by making the darkness conscious.

When I catch sight of a shadow, I imagine a person’s alter ego, the duality of human nature (the conscious and unconscious mind), the dark side of the psyche, evil lurking in the darkness, the shadow of death, the magic of light casts the beauty of a shadow, the soul of the body, the dark side of humankind. I often incorporate shadows into my street photographs. As well, I use the shadow as a spiritual practise to remind me to be mindful of my surroundings, to become aware and pay attention. We can also use the shadow as a spiritual practise, reminding us to make peace with character attributes we dislike in ourselves.

Mark Strand, the poet, wrote: “When we walk in the sun our shadows are like barges of silence.” When we stop, pay attention, shadows becomes enchanting, like gazing at abstract art that evokes awe or wonder. Or they can be like ghosts or spirits of the deceased wondering in the city or countryside. When we stop, pay attention, ponder their meaning, delight in their beauty, shadows can be a source of inspiration for creativity.

Lover of poetry, fiction, creative nonfiction. Professional photographer and writer. Without the arts, life would be rather mundane, like a walk down the same old path on a dull day.
View all posts by Dave Hood →
This entry was posted in Essay and tagged artwork, astrology, comic books quotes, Dave Hood, essay, Games, Kumi Yamashita, mythology, popular culture, Religion, shadow, Spiritual Practise, symbolism, The shadow, Video, writer. Bookmark the permalink.